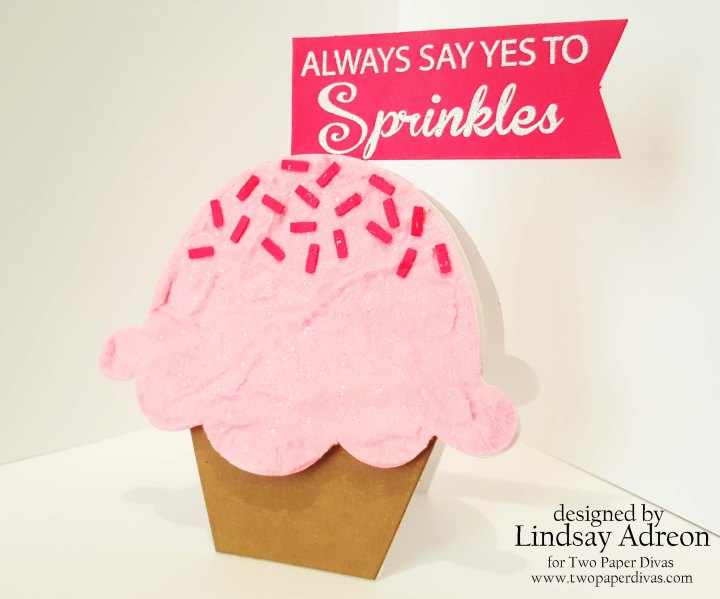 Recently on my blog, I showcased how to create a circle card for something a little fun and different. Today, I wanted to take it one step further and show you how I created a fun cupcake shaped card using my dies. This is just one creative way to stretch your dies even further! This obviously isn’t limited to just this shape, this technique can be customized to whatever shaped die you want to use. Just think of all the possibilities!!! I know my mind is still filled with shapes I want to create! As usual, I turned on my camera and recorded the process so you too can create a fun shaped card of your own!

This card started off with A LOT of die cutting. I used the large cupcake die from Paper Smooches to make the shape for my card base. I first cut 5 of the frosting shapes from white card stock. And then I cut four liners from white card stock and one liner from Kraft Cardstock. You can also cut a frosting shape from fun foam, which will make assembling your card later a bit easier, however this is optional.

With my die cutting complete I needed to start assembling the card base. To make sure it would be nice and sturdy I doubled up the liners by using Tombow Mono Multi Glue to adhere two together, making sure they were lined up perfectly. I then put a piece of double sided adhesive on the top of each cupcake liner. I stuck one frosting onto one liner and then to make sure both the front and back of the card would be even, I lined up my second liner with the liner I had already attached and then removed the adhesive backing paper, and very carefully lined up the frosting with the frosting previously attached. Once everything was perfectly lined up I pushed on the double sided adhesive to make it was secure. I also wanted to hide my liner and make the base a little more clean looking so I smeared more glue on the second frosting pieces that were not attached yet and lined then up with the frostings that were attached to the liner. This just allowed me to hide the liner and when the recipient opens the card the inside will be nice and clean. It also gives the base a little more heft and just makes it that much sturdier.

Now it was time to attached my front and back panels of my card base together, but first I needed to put a score mark in the back panel, just so it would open a bit easier. I then used some double sided adhesive and attached the front and back together to create the card base.

I wanted to take my fifth die cut frosting and make it look like real frosting. I first placed a small dollop of whipped spackle from Faber Castelle and placed it on a palette that I had smooshed some Raspberry Fizz ink onto first. I used my palette knife to mix the two together to create a light pink “frosting”. Using my palette knife I smoothed the spackle onto the white die cut frosting and then used the knife to create some texture. I wanted to add even more texture to the frosting so I applied heat to the spackle using my heat gun to create a bubble effect.

I wanted to add sprinkles to the top of the cupcake, so to achieve that effect, I die cut very small strips of Raspberry Fizz cardstock, and using my quickstiks tool and glossy accents, I applied them to the top of the frosting.

To create my sentiment banner I simply stamped in Versamark ink, heat embossed in white, created a fish tail banner with my scissors and attached it to a strip of scrap cardstock in order to attach it to my card base. 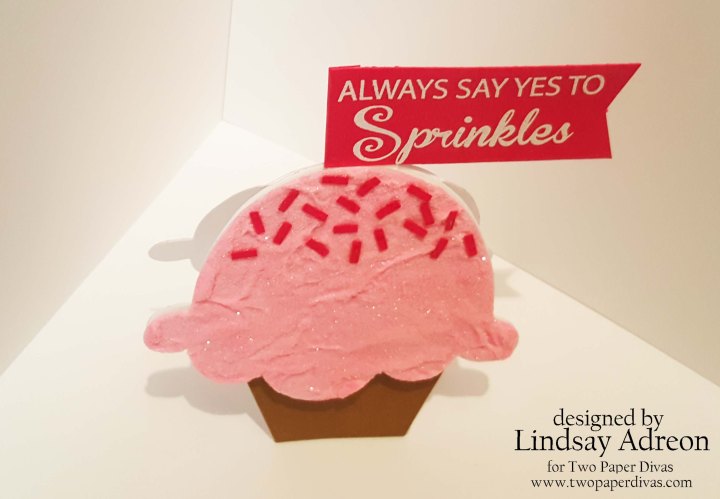 To assemble my finished card. I applied the kraft liner with double sided adhesive. And, using the same double sided adhesive I placed the sentiment banner down,  using the scrap white cardstock as the piece to attach to the base. I then applied the foam frosting to the spackled frosting and then that layer onto the card base to finish off the card! 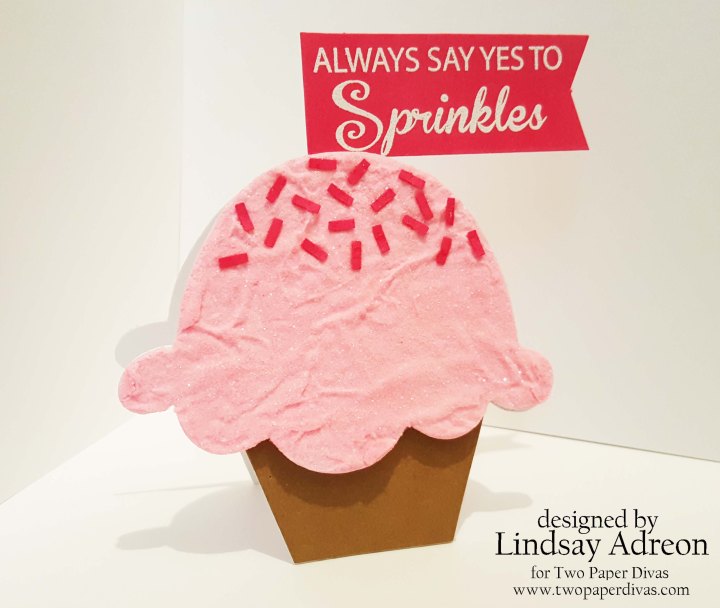 I hope you enjoyed seeing how I created this fun shaped card and don’t forget to take a look through your dies to see what fun shapes you can make! If you want to check out any of the supplies I used today, the link list is below!

Thanks so much for looking!! Happy Crafting!!

Happy birthday to my Madi!!! It’s this girl’s 6th birthday! We have been asking Alexa EVERY DAY for a few months now how more days and finally, the day is here!! It’s going to be a different birthday this year, but we’re making the best of it. Love that she is still so excited even though we have to stay home ❤️🎂❤️ #birthdaytime #quarantinebirthday #sixthbirthday
#Repost @joyclairstamps with @get_repost
@joyclairstamps is having a great sale!! Be sure to check it out!! The link is in my bio!! #craftysale #joyclairstamps #clearstamps #cardmaking #biblejournaling #mothersdaysale #flashsale
@essie has a newer “Expressie” polish line that is supposed to be quick drying. I tried it and actually love it! It does dry much more quickly than the original polish, has a wider brush, and taller/slimmer bottle. My little girl always wants her nails painted, but doesn’t love dry time. This worked perfectly for her! This color is #150 Strong at 1%